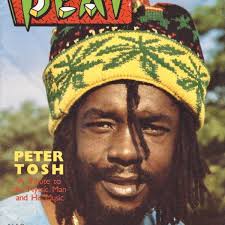 -Destiny is Destiny, and Spirit is Spirit,someone said in his own creation:The great (PETER TOSH), ex member of the original (WAILERS Band),was shot dead by coward bullets in (Kingdton-Jamaica) on the (11th of September-1987),because of cash money,the roots of all evils in this world of competition and capitalism.He was a real reggae revolutionary labeled as the (« Malcom x ») of jamaican reggae music!In consequence,we can’t help paying a tribute to that reggae legend who busted up the international reggae entertainment field in the (80s):

-(« Let’s remind us through some of his committed lyrics »):

In the lyrics(« not gonna give it up »), he made it clear in his own words:(« I’m not gonna give it up, i’m going, i will be fighting til (Africa and Africans ») are free.In the same trend, he added in another lyrics (« African »), he warned in an african spirit, when aluding to the african identity:(« Don’t care, where you come from, as long as you’re a black man, you’re an african, no mind your nationality, you have got the identity of an african!

-Words can’t express it, because his songs were conscious and committed , but death met him on the way in (Kingston-Jamaica) on the (11th of September 1987):Down the line, they have gone, won’t be forgotten!